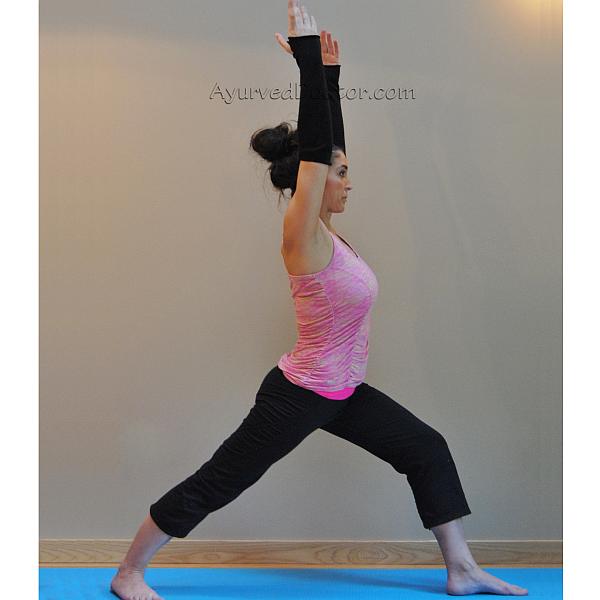 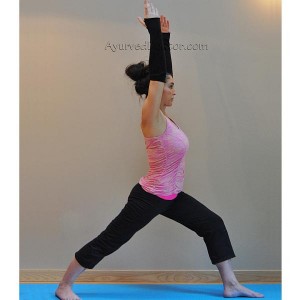 Virabhadrasana I is also known as Warrior 1 pose since it is believed to commemorate the exploits of an ancient and mythical warrior. Unlike many other asanas, Virabhadrasana has got a mythical root in Hindu mythology. A mighty king, Daksha gave away his youngest daughter Sati in marriage to Lord Shiva. However, due to false arrogance, he did not invite Lord Shiva and his daughter, Sati to a grand Yagna (a Hindu ritual sacrificial ceremony) that he conducted with great fanfare, inviting all other Gods, demi-gods, rishis (saints), kings, and others. Sati came to know about this Yagna and proceeded to the Yagna, ignoring the warning of Shiva not to go there. An argument ensues between the father and daughter, and Daksha insulted Shiva severely. Sati declared that she cannot live anymore with the body given by Daksha after such insult and leaped into the Yagna fire, immolating herself in that fire.

When Shiva came to know about the death of Sati, he was devastated. He yanked out a portion of the hair from his head and hit it on the ground. A mighty Warrior rose out of the hair, and Shiva named him Virabhadra, Vira meaning heroic and Bhadra meaning friend. Shiva ordered Virabhadra to go the place where the Yagna was being conducted and destroy, Daksha, the Yagna and even the guests attending the ceremony. Virabhadra completed the orders of Lord Shiva in three steps. They are known as three Virabhadra aspects, and they are as follows:

Lord Shiva also arrives at the scene and witnesses the enormous havoc Virabhadra had wrought at the place of Yagna. He absorbs Virabhadra into Himself and taking compassion on the slain Daksha; Shiva revives his life by placing the head of a goat on the body of Daksha and giving him new life. Sati is born again elsewhere and reunites with Lord Shiva later in another form.

While you practise Virabhadrasana, you can use Mula Bandha or root lock and Uddiyana Bandhas or abdominal lock to enhance the stability of the body. The combination of the bandha with Virabhadrasana creates a unique axial extension in the spine, which helps in supporting your torso since you bring your chest up and back in this asana. You can vary Virabhadrasana in two ways to achieve more depth to the asana. The first one is to reduce the lateral distance between the two legs and the second one is to increase the size of your stride. However, you should remember that the support to the base gets reduced when the centre of mass of your body becomes lower. It can become increasingly more difficult for you in maintaining the correct posture and body balance.

Persons with heart ailments should avoid Virabhadrasana. Other conditions like tight latissimus, tight rectus femoris, tight psoas major, weak hamstrings and weak quadriceps in the forward area of the legs can also be obstacles to the free practice of Virabhadrasana. Always learn Virabhadrasana and other asanas only from a trained yoga master.

×
We use cookies to ensure that we give you the best experience on our website. By using our services, you agree to our use of cookies.OkPrivacy policy